Optojump Modular is an optical measurement system consisting of a transmitting and receiving bar.

Each of these contains 96 leds (1.0416cm resolution).
The leds on the transmitting bar communicate continuously with those on the receiving bar. The system detects any interruptions in communication between the bars and calculates their duration.

In its modular configuration, Optojump Next makes it possible to analyse a walk, a run or particular specific movements. The CPU works in real time, making it possible to assess complex exercises like shuttle tests.

As well as the data of the “single metre” configuration, the modular configuration makes it possible to measure:

Thanks to the practical and innovative system of joining bars with the dedicated connecting plugs, the modular system can be assembled in just a few minutes. It does not need connection cables or an external power supply and it can be from 2 to 100 metres long.

Optojump may be used in combination with the Witty Timing system. The photocells allow for extremely accurate and reliable timing, acting as both the start and stop impulses for running a test. Multiple gates can be added to get intermediate times along with the range of parameters fed back by the Optojump modular system.

Starting from version 1.8 of the OptoJump Next software it is possible to use a particular bar configuration for obtaining a two-dimensional measurement area. To the classic bars (which we will call X), more bars (Y) can be added to form a rectangle (min. 1×1, max 6×6 mt.).

The regular OptoJump Next bars have a maximum transmission/reception distance of 6 metres; with this hardware you can use at the most 5 meters of ‘X’ bars and approx. 50 cm of room with the ‘Y’ bars. 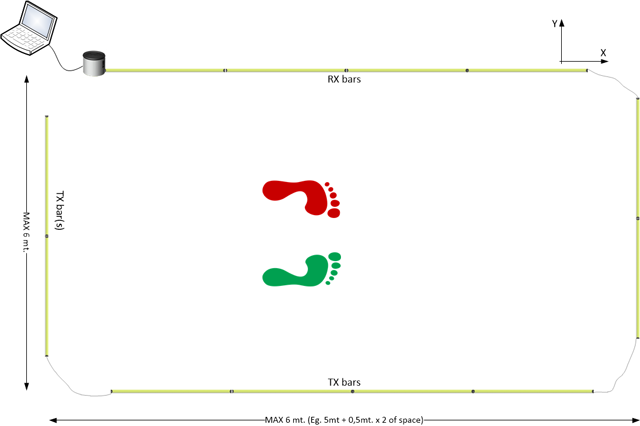 The regular closing Y TX bar is usually a bar WITHOUT interface drum. Updating the firmware of the TX bar with drum (already included with all articles having a serial number higher than 00500) this last hardware type can also be used. Therefore with a 5-metre modular system (Kit £OGA051) it is for example possible to use the complete hardware building a 4-metre-long linear system. For serial numbers lower than 00500 it is possible to ship the bar to Microgate or a distributor and receive a free update (shipping costs for sending and receiving are excluded). It is also possible to buy one or more additional single TX bars.

If using a Y-bar with drum, make sure that the power supply is SWITCHED OFF (power off). The bars situated on the perpendicular sides are connected using a variable-length cable (usually 1.5m); this allows to distance the actual measurement area (the rectangle formed by the regular bars and highlighted in gray in the following picture) of the Y bars; this area allows the patient to leave the test area without having to jump over the bars or, more frequently, turn around by 180° and go back. In fact, the software allows to carry out an undefined number of back/forth courses recording a sufficient number of steps also in case of linear systems of only a few meters.

With this configuration, all test types can be carried out. The tests which make most use of this feature are the tapping and march-in-place tests, where the right and left foot are automatically identified. The Drift protocol, which previously needed 4 series of one-leg jumps, now is easier to follow (two series per leg are enough; in this case use the new Drift Protocol 2D).

Each test will now show the “roll of positions”. Displaying the Optojump bars on the monitor, during the test a dot will indicate the athlete’s centroid foot. The first (pink colored) dot shows the initial position, whereas the following will form the athlete’s movement scheme during the test making us understand how the movement is controlled. The color of the dot for jumps fades, whereas the current dot is highlighted in white. In a 2D system, the roll of dots will of course trace the movement on X and on Y.

In the following examples we will see two jump tests of 15 seconds, where in the first one the athlete has controlled the position well staying near the initial point, whereas in the second one he has moved around without control. Quoting a famous tagline of the past, always remind your athletes that “power is nothing without control!” “We have been using Optojump for the last four years at UK Athletics, as part of our daily biomechanical support to elite athletes, across all event groups. Optojump is a reliable and invaluable tool used to provide real time objectivity to running characteristics within technical sessions.”

The Optojump system is being use by some of the UK’s Leading Sports Teams and Organisations:

Click here to view some case studies using Optojump Next

The links below provide peer reviewed articles that relate to the product, Perform Better have sourced these journals to provide research into the product which may be of help.

The influence of Changes in Acute Training Load on Daily Sensitivity of Morning-measured Fatigue Variables In Elite Soccer Players. Thorpe, R (2016) highlights the influence a Optojump Next Modular System can have on elite performance.

Free Shipping on orders over £999 Dismiss

Tell us your question about Optojump Modular System